I have always ad a habit of bringing home strays… -I’ll wait here… while the jokes about the less than stellar men I’ve dated die down…- Now that we have that out of the way,  I did mean animals.  It started with Harry the Cat when I was about eight years old, he belonged to a neighbour, but apparently he liked us better.  The neighbours decided to move, and they were worried he would try to cross a busy road to come and see us, so they asked if we would like to keep him.  Harry became part of the family!  A few years later when Harry got sick and “crossed the rainbow bridge” we adopted “Sparkle” from the feral cat colony; also known as my grandmother’s front porch.  She was spun, but mostly love-able! (The cat. My grandmother is just spun.)

Sparkle had just adapted to her queen of the household status when one of mom’s coworkers found a sickly little tabby cat downtown Brantford chasing a girl from the YMCA who had been sharing her donut with him.  He was skinny all over except his bloated belly (you know.. like the little kids on TV who need sponsored.) His eyes were infected and mostly closed, and by the time mom brought him home he had been flea dipped so he had an interesting odour and kind of just felt greasy.  He had come to the right place and “that gross-looking thing” won my heart, became “Gizzmo,” and for less than a dollar a day he was adorable and back to health in no time!

In time, it was time for me to move out on my own, and I couldn’t very well disturb the now King of the household from his throne, but couldn’t imagine not having a fur kid to snuggle up with.  I went to the SPCA: the first time ever I had gone in search of a pet instead of finding one accidentally.  I played with a few cats, but actually had decided today would not be the day as nothing seemed to click.  I turned and began walking towards the door, and as I came by the corner cage, which appeared to be empty, suddenly there was movement from under a box inside, and a striped paw shot out between the bars and smacked me right in the shoulder.  The face attached to this paw stared at me as if to say “you didn’t think you were leaving did you?” His ears were too big for his head, and his sense of entitlement was laughable.  Two boys at a public school had found him and named him “Oreo” but it didn’t seem to fit.  Oreo became Oscar, and still pokes me in the shoulder if I take up more than my fair share of the pillow space.

I’m well used to cats finding me, and fortunately their timing is such that I’ve never had more than two at a time.  I hadn’t really considered the possibility of anything else “finding me” accidentally until one incredibly cold January night in 2011.  We were in a rush, heading for a Buffalo Sabres Game.  I was rushing to feed the horses, and being picked up at the barn.  As I looked down to close and latch the stall door, out of the corner of my eye, I saw movement.  A small furry thing, running across the floor.  Startled is an understatement.  Coon? Skunk? Rabid animal coming to bite me!? I let out a blood curdling scream which, I’m very thankful no one was around to hear.  As I actually turned my head and focused, it wasn’t scary at all.  It was actually adorable.  It was.. a tiny teddy bear? No… A puppy!

Seven weeks old, starved, invested with lice, and well beyond cold made obvious by not only the uncontrollable shivering of her tiny body, but also the frost bite on those poor little wee paws… Another lost soul that knew exactly who to run to for help.  Into my jacket, and us both wrapped in a horse blanket… We went to plead our case to the then “man of the house” and we both already knew she was staying!  To seal the deal though, she sat on his foot and begged.

We had no dog food.  We had no dog crate.  At nearly seven p.m. on a Friday night, we were going to need to be creative, and we definitely were not making it to our hockey game.  We all watched the game on T.V. and decided her name should be Sabre; despite the fact they lost that night.  Thanks to friends and neighbours we managed to get her cleaned up and fed, and made do until morning when the vet was as surprised as we had been about where she had come from, and how she had survived.  Some mysteries will remain a mystery, including her actual breeding.  Speculations have included Sheppard Husky cross, some Terrier, and Wolfhound.  Because of our location being almost on Indian line, and the possibility of her being just about anything including wild I began responding to questions about her breeding by calling her my “Hager-Sweken-Wolf-Hound.”

Another interesting little twist…For those who believe/appreciate this kind of “thing.”

Approximately four months prior to this I had gone to a the psychic fair for fun.  I had lost my friend Kevin very suddenly the previous summer, and the psychic I spoke with actually nailed a few things that I am at a loss to explain.  She went on to say I would never go shopping for a dog one would find me because Kevin would send it.  It seemed to make sense, Kevin liked and always had dogs.  at one point he had three dogs, but his favourite; his best friend in the world was his girl Sable.  I didn’t give a lot of attention to the possibility of a dog being sent by heaven or Kevin. When I walked out of the psychic fair, I didn’t really give it another thought at all actually… Until the first time (and many times there-after) when I meant to call Sabre, and called “Sable” instead. 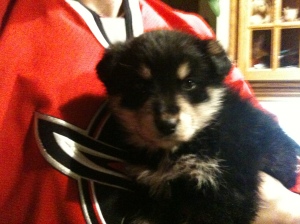 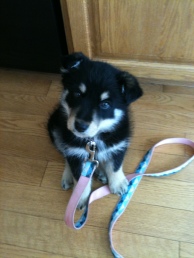